In this post, I’ll explore my current “best” guess. Keep in mind that my “best” guess changed over time. I would consider some of my previous best guesses wrong, so by extrapolation, my current best guess is also likely to be wrong. Also, I haven’t researched this idea very much, I would not be surprised to find that I missed some existing work.

As I said earlier, the “Analogy as the Core of Cognition” idea needs further investigation. (video). This idea makes a lot of sense, the only problem with it is that “analogy” is defined very broadly: as the common essence shared between two concepts.

I think we can simplify this idea a bit and adopt a new terminology. Let’s rename concept as structure and analogy as isomorphism. Rapid quick check on wikipedia for isomorphism:

In mathematics, an isomorphism is a homomorphism (or more generally a morphism) that admits an inverse

Not very useful. If we check the entry for homomorphism:

In abstract algebra, a homomorphism is a structure-preserving map between two algebraic structures

The idea behind the “mind as an isomorphism machine” is the following: there is a lot of structure in the world, and the mind is trying to capture it. So it slowly builds an internal model that mirrors the world, in other words, a model that is isomorphic to the world.

An important detail: in this process, he mind is not trying to make sense of the world (ie, build a model) as it appears, but rather as it really is. In other words, it is modelling the true causes that are generating the observed sensory data. This explains why we have optical illusions.

For example, take this illusion: 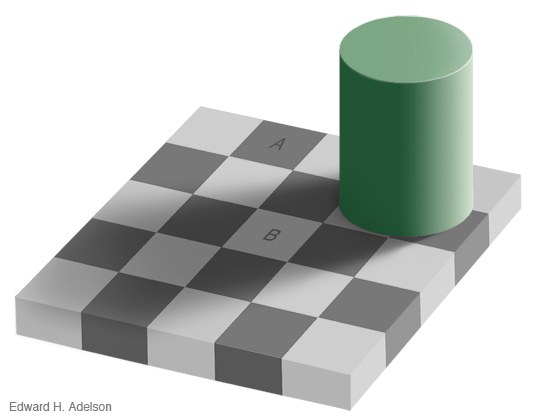 We see square A and square B as having a different color. But if you really check, you will find that in the image, A and B really are the same color, that is, the RGB values are the same.

But let’s ask the question again: are A and B the same color?

So when we look at the image, the brain constructs a model of the elements as if they were elements of a real hypothetical world and infers the most likely causes: light sources, objects, shapes, orientations, shadows… The model-constructing and property-inferring is so good that the colors for the squares A and B are inferred as not the same - exactly as they would be in the hypothetical world depicted in the image ! A and B having the same values in the sensory data is just a coincidence.

Naturally, this model-building is not restricting to vision. It also applies to logic, social situations, intuitive psychology (theory of mind) and intuitive physics, to name a few.

I’ll leave it at that for now. I’ll explore the implications of this idea in future posts.